Many of the 1950s hairstyles were simple while others could be extravagant. Soft, curly styles were all the rage and the shorter the hair, the better. Glamorous hairstyles were popular as well. The fifties set the stage for some styles that are even seen and worn today. With the war just ending, the 1950s were a time of peace and prosperity.

One of the most popular hairstyles of the 1950s was the ponytail. Still worn and loved by women and girls of all ages, the ponytail is a simple and classic style. There is nothing to a ponytail, all you need to do is to gather the hair behind your head and secure it into an elastic or ribbon. In the 1950s, it was quite popular to wrap a chiffon scarf around your ponytail for a casual, fun look.

Some other popular 1950s hairstyles were:

The ducktail or D.A. was a cool style for men in the 1950s. Men would comb back their hair and grease it into place. Think John Travolta and the T-Birds in Grease or Fonzi from Happy Days. Sideburns were also popular for men. James Dean and Elvis wore them and made them popular for men and loved by women.

With hair salons popping up everywhere in the 1950s and women paying more attention to their locks, the demand for hair products increased. Some beloved products included: 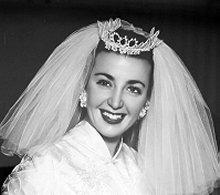 Women always want to look like their favorite stars. Many hair trends and fads result from what is seen in the movies or on the red carpet. Some influences of 1950s hairstyles were:

Straight hairstyles were no longer the rage in the 1950s and having curly or wavy hair was in demand. The 1950s were a time when visiting the beauty salon became popular and hair became a focus of fashion, and that trend continues even today.