Thousands of girls and women across the world have gone to their hairdressers and asked for an Ashlee Simpson hair style. A style that resembles that of Ashlee Simpson is so popular because she is an admired and trendy young actress and rock star who has been in the limelight for the past few years - along with her famous sister Jessica Simpson.

From Blonde to Brunette

Ashlee Simpson has gone through dramatic hair color changes in the past. One of the reasons for her drastic change from very blonde to dark brown was probably due to the fact that she wanted to look substantially different from her older sister whose hair is very blonde. Another reason was probably that her quick change from blonde to brunette created a media frenzy, which was a good move from a public relations perspective. To make the situation even more interesting to the public, Ashlee decided to color her hair by herself - and this fact was made well known to reporters.

Ashlee is not only famous for her blond and brunette hair styles, but also because she has also worn her hair in a red shade with plenty of coordinating highlights. 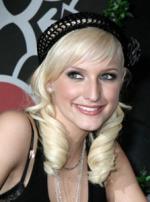 When Ashlee began wearing her hair in a dark shade, her hair stylist was able to add hair extensions that perfectly matched the color, which made her entire head of hair look much longer and fuller.

There are several celebrities who have recently been seen with their hair in trendy-looking braids. Even during periods of time when her hair is in a short phase, Ashlee has worn accent braids. She has also been seen with her hair pulled back to a braided ponytail. 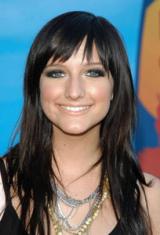 Ashlee as a brunette.

Ashlee Simpson's face shape is commonly described as "long." Today's most popular hair styles for individuals with this shape face include long bangs that are swept across one side of the face. Like many other celebrities with this face shape, long and swept bangs are often incorporated into their hair styles. One of the reasons that Ashlee Simpson is rarely (if ever) seen with an extremely short hair cut is that this type of cut is not usually flattering on a person with a "long" face.

With the help of virtual websites such as The Hair Styler.com, anybody can see up-close pictures of most Ashlee Simpson hair styles, learn how to replicate any of the cuts, and "try on" any of Ashlee's styles using a virtual program. In order to make full use of The Hair Styler.com, a membership to the website is required. However, if an Ashlee Simpson hair style is desired, this may be the best way to ensure that it will look good prior to actually getting the cut.

Because Ashlee is famous for so many colors and styles, using a virtual hair style program is the best way to figure out which will look best on any individual. Virtual programs allow a person to upload a personal photo to a website and then try on an Ashlee Simpson color and/or cut with a few clicks of the mouse.

Even if an Ashlee Simpson hair style is not really wanted in real life, using a virtual hair style program is a great way to be transformed into a celebrity for a few moments!