The variety of black celebrity hair styles is huge, and each look is as unique as the women wearing them. As a whole, most celebrities look fabulous when they make public appearances because they are lucky enough to have personal hair stylists and make-up artists working on them on a regular basis.Celebrities always have fans and followers who try to replicate their famous looks and styles. Of course, styles and trends change each year, and some of the most famous black celebrities have been in the limelight for decades.

One of the common traits among black celebrity hair styles is that most of them are maintained to the highest degree. Healthy hair is the key to a good looking style, and most black celebrities are religious about conditioning, moisturizing and hydrating their hair.

Other tricks that celebrities often use to ensure that their hair looks great are:

Tyra Banks is a supermodel who has hair to die for. As with many celebrities, her hair style changes frequently. One day, her hair is straight and the next day it is curly. Due to her modeling career, Tyra must have her hair styled differently on a regular basis - but she is known to never dye her hair different colors. She does utilize hairpieces so she can give the illusion of having highlights, and she also commonly wears it in braids and ponytails.

Oprah is probably the most recognizable black celebrity in the world, and so are her various hair styles. She commonly wears her hair straight with flipped up ends, and she is also frequently seen with curls. In fact, in 2004, Oprah was named, "Best CurlFriend," by the hair care company with the same name.

Unfortunately, Oprah has had her share of hair style mishaps. A few years ago, Oprah received a bad perm, causing her hair to fall out. Many remember when she reported this to the public on national television.

Halle Berry has won many beauty pageants - probably partially due to her great hair. Currently, as an award-winning actress, Halle has made some interesting statements about her hair. First, she always resists adding color to her hair, she does not like to use hair weaves, and she does not like to have her hair completely straightened for fear of irreversibly damaging her hair. She has also been quoted as stating that she prefers her hair cut short. 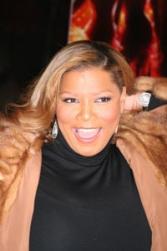 Queen Latifah.
Chante Moore has worn several different hair styles in the not too distant past, and one of the most popular is a layered look that is rounded around her face. She has also added dark reddish-brown coloring to her hair as well as copper highlights.

Queen Latifah is a celebrity who knows how to take care of her hair. She is known for getting her hair trimmed on a regular basis to get rid of dry ends, and she also frequently conditions her hair. Because of the care she gives her hair, it is very strong and can resist damage that can be caused by styling it for movies and public appearances.

Janet Jackson has been in the public eye for several decades. Janet is always trying new colors and styles in her hair, and her most recent experiment with color included a very bright red shade. Along with the color, she wore it very curly. This particular trendy style got her a lot of media attention!

Beyonce Knowles has famous hair. In fact, her hair is so famous that it earns her several million dollars a year. She is not known for one particular style, but her hair is always in seemingly perfect condition. For public appearances as well as print advertising, Beyonce has worn everything from a curly afro to stick straight hair, but her hair is normally long. She also commonly wears her hair in a high ponytail.

There are many other black celebrity hair styles that can be seen on hair styling websites. Some of the websites simply show pictures, but others provide tips on how to achieve replica cuts and styles.