The earliest electric shavers seem very primitive compared to what is available on the market today. The earliest forms of shavers were really not even electric at all! They were not powered by an electrical cord, a motor, or even a battery. Instead, they were hand-powered, usually by manually pulling a string that caused the shaver's blades to rotate. Another difference between old shavers and modern day shavers is that the old versions were not meant to be used with any type of water, soap, or cream. They were for dry skin only. Today, shavers are commonly (but not exclusively) used in conjunction with shaving cream or shaving gel.

Over the course of several decades, the concept of an electric powered razor evolved from a hand powered apparatus to a shaver that can be used wet or dry, in or out of the shower, and with or without a pivoting head.

The first obvious difference is that electric shavers for women are quite a bit cheaper than shavers for men. The reason for the price difference is that women primarily use the razors to shave their legs and under their arms. The hair in these areas is much easier to shave than hair that grows on a man's face. Therefore, women's shavers can be manufactured with less powerful motors. Hence, they are cheaper.

Other common features on a women's shaver are pivoting heads - which makes shaving under the arms much easier. 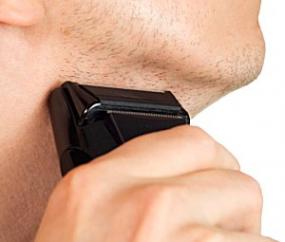 When looked at statistically, a relatively small percentage of people actually use electric razors. The numbers are about 10 percent of females and 30 percent of males.

Some of the reasons that the numbers are so low may have to do with the following facts:

However… there are also many benefits to using electric razors, including: