Two kinds of looks come to mind when Gothic hairstyles are discussed. One is a subgenre of a punk hair look, commonly seen in shopping malls, although this is really considered "Goth," rather than "Gothic." The more accurate Gothic hairstyle harks back to the Victorian era and can be harder to do, but can be spectacular once you've accomplished it.

The Gothic lifestyle draws its name from the Victorian term for a certain kind of dark and violent literature. It can also relate to the Gothic period in the Middle Ages, pertaining to a certain imposing style of architecture.

The Goths who embrace the Victorian aspect of the lifestyle came to it from an interest in punk music and fantasy. The original punk look embraced a flowy, Victorian style, using top hats and velvet and ruffles, while imprinting it with its own unique vibe. While punk music isn't a common denominator anymore, the fascination with dark fantasy certainly is, and there are many events in every city all year round where Goths can put on their finest and gather in all their glory.

Although the look can range from medieval, to Elizabethan, to Victorian and to pure punk, it's all still Goth. It is commonly stark, and many Goths dye their hair black, or black with shades of funky colors like bright red or purple. But blondes and redheads can be Goth as well. The hair can be worn down in a seventies style, but usually with a fall, or hair extension. Elvira is a great example of this, although others will argue that she is not Goth at all. That's the beauty of Goth, it can be different things to different people.

How to Create a Gothic Hairstyle 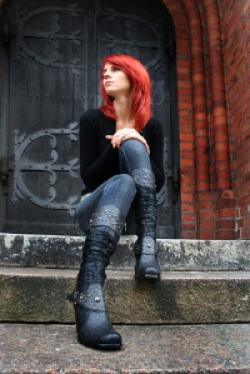 Goth hair can be funky colors.

Obviously, the first thing you need to do is determine what look works for you and what feels right. The big hair that emphasizes the romantic and mysterious, usually incorporating crimped or curly hair, goes well with most of the costumes, especially if you prefer corsets. Big, romantic hair over a tight corset creates a nice contrast. This look is achieved in a manner similar to creating a 1950s hairstyle, or a beehive hairdo. You must do a lot of backcombing and ratting to make your hair stand up, and then be very liberal with the product to keep it this way. You may find it easier to set your hair in rollers and then create a basic updo style, accessorizing as you see fit. Loose curls worn mostly pinned up, with some long curls hanging down the back, will give you a striking, sensual, and elegant look. Even at its most punk, the Goth style is more about the clothes and makeup, so as long as your hair matches your overall look, it'll be perfect.

A wide range of serious Goth pictures can be hard to find. To see a large collection of quality photos, go to Viona Art, where the artist has dozens of artistic Goth photos on display. As you can see, most of the hairstyles involve curls and romantic updos, with the emphasis on the costume and makeup.

The beauty of the punk style now is the same as it was in the 1970s - it can be whatever you want it to be. The punk Goth look is all about the individual, so you can wear all black and buckles and stripes and white makeup, or velvet and flounces and funky hats. Or whatever makes you happy. For gothic hairstyles, it's usually more about the color than the cut. Blues, pinks, greens and of course black will all give you a Goth look. But really, Goth is about attitude and state of mind. And don't let anyone tell you otherwise.