History of the Hair Straightener

Heated Combs: Women have been attempting to perfect a hair straightener technique for more than 100 years. Before modern-day hair appliances, women used to run specialized combs that were heated to high temperatures through their hair in an attempt to permanently change the structure of their hair so it would never re-curl. Another early hair straightener technique included the use of a hair iron.Burned Scalps: Not long after women began using heated combs and irons to straighten their hair, chemicals became widely available to use for this purpose. Chemicals were used in conjunction with heated combs and irons, but the prevalence of damaged and burned hair and scalps was very high.

Electric Appliances: When electric hair appliances were invented, straightening the hair became much easier because the heat level could be adjusted and less damage occurred.

Ceramic and Tourmaline: Today, the most common appliances used to make hair as straight as possible are made with ceramic or Tourmaline heating elements. Not only do ceramic and Tourmaline conduct heat well, but they also distribute heat evenly, which causes less irreversible hair damage.

Straightening in a Salon

Women who have very curly hair and know that they want it to be permanently straightened often go to a hair salon and have it chemically treated. Depending on the strength of the chemicals used, a treatment can last anywhere from several weeks to several months. How fast the hair grows plays a role in how frequently the chemicals must be reapplied.

While a hair professional should be trained to straighten hair, following are some potential problems associated with the chemicals:

Normally, a hair professional is experienced with hair straightening chemicals and can use them without any adverse side effects.

Color and Hair Straightener Together? 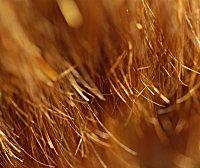 Too many chemicals can severely damage hair.

Anyone who has color-treated hair and also wants to have their hair straightened with chemicals will want to have a serious conversation with one or more hair professional(s) prior to the straightening procedure. Because coloring the hair utilizes chemicals that can dry the hair, adding additional and harsh straightening chemicals can cause true damage to the hair and may cause the hair to look extremely "fried."

Without a doubt, the safest way to straighten the hair is with the use of a straightener appliance with heating elements made with ceramic and/or Tourmaline. Using an appliance is much safer than using chemicals on the hair, and an appliance allows a person to wear curly hair one day and straight hair the next… if they so desire.

The cost of straightening appliances varies depending on the brand and quality of the product. Some of the least expensive models are only $30 or $40, but the more expensive versions can run a couple of hundred dollars. Most hair professionals recommend that a high quality straightener be purchased for use at home because a cheap one may not have a sufficient heating element and could cause permanent damage to the hair.

Hair straightening appliances are easy to use and the results they produce will last until the hair becomes wet or is washed.