Whether chic and clipped or long and pin-curled, poise and sophistication are the key elements of a Halle Berry hair style. This popular American film star is known for her stunning figure and a graceful face that is always framed by a frequently coveted crop of hair.

Halle Berry was born August, 14 1968 in Cleveland, Ohio. During the 1980s she won several beauty pageant titles including Miss Teen Ohio and Miss Teen America. In 1985 she became the first runner-up in the Miss U.S.A. competition.

Having begun the study of broadcast journalism in a community college, Halle later gave up the idea of news reporting in favor of the entertainment industry. After moving to the exotic metropolis of New York City, Halle started working as a catalogue model.

A series of television roles quickly led to a film career, during which she starred alongside Samuel L. Jackson in the film Jungle Fever. After this ground-breaking role, Halle continued to pave her way in the film industry, starring in films like The Last Boy Scout and Boomerang.

In 1999, Halle received a Golden Globe Award and an Emmy Award (Best Actress) for her convincing work in Introducing Dorothy Dandridge. In 2001 Halle Berry also earned an Academy Award for Leading Actress due to her role in the sordid film Monster Ball.

Halle has since starred in numerous notable film projects, though, like that of many high-profile stars, her personal life is heavily scrutinized by the tabloids.

Before launching into an overview of Halle Berry's fabulous hair concepts, it is important to note that the key component of any Halle Berry hair style is her hair type. Halle Berry has African American hair that is thick and coarse enough to add volume and weight to whatever masterful creations her stylist can come up with. Finer hair types may not hold certain cropped or kink-curled cuts quite as well as Halle's own.

The Evolution of a Halle Berry Hair Style 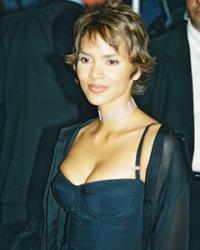 Halle Berry's hair really came into the limelight beginning in early 2002 when the actress approached the red carpet sporting a short choppy style. She had been following this cropped trend for close to ten years, but her Oscar nomination for Monster Ball threw her into the public eye even more, giving her fans additional reason to crave a Halle Berry hair style.

Though her cropped hair was extremely short and curled in 2003, this pixie-ish hair style later evolved into a messy shag that boasted razor-cut ends and heavy layering. In fact, the fundamental component of this sort of Halle Berry hair style is obtained during the cutting stage. The ends of the hair must be razor cut in order to provide the desired wispy texture. A Halle Berry shag is maintained through the use of styling gels and straightening balms which serve to coat and control the hair, eliminating frizz and adding shine. This short shag should be blow-dried in sections from bottom to top; a boar bristle brush should be employed to encourage volume.

The net result of the Halle Berry shag should be full hair that flips up and sticks out in all the right places!

By 2004, Halle Berry was wearing shoulder length hair that eventually extended to long lengths two years later. Fans should be warned that Halle's lustrous long hair is the product of quality extensions and a skilled stylist. Naturally, as we are dealing with a highly paid celebrity, Halle Berry's hair extensions are the finest one can purchase, and the actress uses these extensions to boost the length, volume and curl of her hair. More information on quality professional hair extensions can be found at GreatLengths.com. These extensions feature human hair, which provides the most natural results when applied by a trained stylist.

One last thing to consider before acquiring a Halle Berry hair style is the shape of your face. Though Halle's cropped style is one of the most frequently fabricated cuts, it is important to note that short cropped hair is not flattering to all face shapes. Halle Berry has a well formed oval face that is successfully complimented by slight hair styles. People with long faces should avoid wispy short cuts like Halle's and opt for fuller shoulder length styles that will deemphasize the length of their face.

Discussing your desired Halle Berry hair style clearly with your stylist will streamline the process, almost ensuring that you will receive a cut that is both flattering and customized to your individual needs.