Leeza Gibbons' hair is nothing short of fabulous. With a thick, well-coiffed mane and a killer smile, it's no wonder that Leeza's career is blossoming!

Who is Leeza Gibbons

If you're a reality television fan, you may remember Leeza from her spring 2007 appearance on Dancing with the Stars, but this celebrity's credits extend much further back. She has co-hosted major television shows like Entertainment Tonight, Extra, and spent six years hosting her own talk show, Leeza. In addition, Leeza has demonstrated sympathy and care for persons suffering from memory loss disorders by founding the non-profit Leeza Gibbons Memory Foundation. Aside from numerous productions, altruistic endeavors, and acting credits, Leeza is also known for her great hair. Would you believe she is 50 years old?

Let's face it: thick healthy strands are the effect of auspicious genetics. For the most part, if you were born with fine and sparse hair, you will never be able to grow particularly thick, voluminous hair. In order to best replicate the styles and overall effects of Leeza Gibbons' hair, you will need to maintain a healthy head of hair.

Using products such as hair vitamins, and attempting dietary changes that will nourish your follicles with balanced amounts of proteins and minerals are the first steps towards long-lasting healthy hair. However, many women around the age of 50 will experience some amount of hair loss or thinning due to menopause-induced hormonal changes. 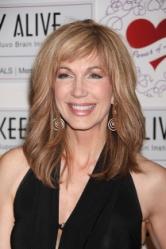 Leeza's hair appears remarkably immune to these changes over the years, and yet it has been suggested that this star dabbles in hair extensions. In fact, many, if not most celebrities, have tried or depend on hair extensions and half wigs to give the illusion of thick bouncy hair. These hair extensions are very sophisticated and the best are made from virgin human hair. The term "virgin" implies that the hair has never been colored and remains in a flawless, healthy condition.

Leeza Gibbons' hair suspiciously never lacks for volume. If you're too scared or lack the finances to consider salon hair extensions, you can nevertheless achieve temporary results with clip on extensions. Check out the Ken Paves line called HairDo at Sephora.com. Whether you're wearing your hair straight or wavy, you will be able to imitate the volume that Leeza Gibbons manages impeccably, even while dancing!

Even extensions require the same styling as natural hair, so whether you're getting a little help or you're working with only your own hair, a round boar-bristle brush and a quality tourmaline hair dryer are the ticket to serious hair body. Always use a heat protectant product before styling. Yes, the latest heat styling equipment uses special technologies that reduce the amount of damage to your hair. However, regular heat styling will require supplementation in order to prevent any cuticle damage. So you may need to employ products such as those in the Ojon hair care line to maintain soft shiny strands.

Stylist Dean Banowetz is the magic behind Gibbons' lush tresses, and even he knows the value of a great hair straightener. Good thing technology is around to smooth out our cuticles and give us the shine that Leeza Gibbons' hair always seems to have!

Where to Purchase Your Supplies

Wigs.com is an excellent place to go for reasonably priced extensions which you can clip-on yourself. For higher quality extensions that require a bonding or weave process, you will need a trained salon professional. Great Lengths extensions are amongst the best and most natural. Take a look at their official site for information regarding the salon closest to you.

Sephora.com is a Mecca for celebrities who like to stock up on the hottest hair and makeup products available. The latest Tourmaline straighteners and blow dryers can be purchased online or in Sephora stores nationwide. If you're looking for styling products, Sephora also carries the complete Frederic Fekkai, Phyto, and Ojon collections.