A Lindsay Lohan curly hair style is one of today's hottest celebrity hair style trends, and it is easy for women to get the same loose, flirty waves as this young trendsetter.

Lindsay Lohan was born in the Bronx in 1986, and in just a few years she was styling her auburn locks for Toys 'R' Us ads and children's fashion modeling deals. Lindsay also starred in some minor parts in daytime soap operas, but her big screen break was at the age of 11 when she starred - twice - in Disney's remake of the classic Parent Trap movie.

That association with Disney would cement Lindsay's image as the fun, mischievous girl next door. In fact, her biggest movie roles have continued that wholesome image, including the 2003 Disney remake of Freaky Friday, and Lindsay's other popular pictures:

As Lindsay Lohan has grown up, however, her silver screen image of wholesomeness and innocence has been tempered by her association with some of celebrity society's biggest partiers: Paris Hilton and Britney Spears. In the past few years, Lindsay Lohan has been criticized for her outrageous and sometimes out of control social life, and she has undergone several bouts in rehabilitation and alcohol recovery facilities. One aspect of Lindsay's style that has never come under criticism, however, is her stunning hair styles. 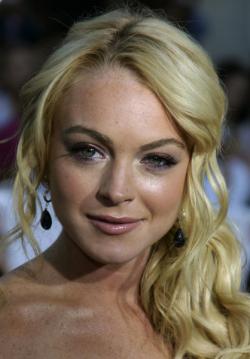 Lindsay pulls her curls back for a sleek style.

Lindsay Lohan is best known for a wide variety of hair styles - straight, curly, various colors, and more, each one of which has inspired fans to create their own Lindsay style.

Lindsay Lohan's straight hair styles are her most popular and most frequent styles. These sedu hair styles are sleek and sophisticated, but with Lindsay's layers and her carefree attitude, even sleek hair can be fun. At the same time, it can easily be wrapped into elegant French twists and other updo styles for the variety of award shows and formal appearances Lindsay attends.

Lindsay Lohan curly hair styles are also fun and carefree, but she rarely wears tight, confining curls. Instead, her long hair is elegantly waved, with large curls that add texture and structure to the hair style. Most frequently, Lindsay wears her curly hair loose with subtly side swept bangs and an off-center part. The curls may be contained with a simple hair accessory such as a barrette, or a more formal curly updo may have face-framing curly tendrils. Regardless of the style, Lindsay's curls are one of her most popular looks.

Lindsay Lohan is also known for frequently having different hair colors. Her natural auburn locks have been lightened to golden blonde with honey colored blonde hair highlights, darkened to a rich, deep brunette shade, and even sharpened into vibrant red hues. In every color, however, Lindsay has worn her same characteristic waves.

It is easy for eager fans to create their own curly style similar to Lindsay's freeform waves. Layered hair can best mimic Lindsay's locks, because the layers will lighten the hair and make it easier to add volume with the curls. Create the curls with a large barrel curling iron or large hair rollers, using a small spritz of hair spray to help them hold their shape. After the curls are formed, they should be separated gently with fingers instead of a brush - brushing them will destroy their definition and blend the layers too closely together. To wear the style just like Lindsay, the hair should be loose and pulled forward over the shoulders on both sides so it drapes over the collarbone. Because Lindsay's hair styles have changed color so frequently, the hair color is less critical, though her curly styles are most often in highlighted blonde and brunette colors. Hair accessories should be minimal, in keeping with Lindsay Lohan's carefree style and attitude.

A Lindsay Lohan curly hair style is popular with young women throughout the country, and because Lindsay has a range of hair colors, it is easy for anyone to imitate her luscious locks in a fun and flirty way.