Pigtails are Not Just for Kids

Pigtails are most frequently seen worn by young girls, but there is a current hairstyle trend which encourages adults to wear them as well. A hairstyle consisting of two ponytails instead of one is fun, stylish, cute, and sometimes even sexy.One of the reasons that this hair style has been popular for so many years is that they are quick and easy to add to most hair. The simple task of putting them in consists of parting the hair down the middle of the head, gathering the hair together on each side, and securing it with two separate hair bands, bows, or some other hair accessory.

The most basic style makes the hair look symmetrical on each side. However, there are many things that can be done with the tails once they are secured.

Pigtails vs. Tails of Pigs

The word "pigtail" has been around for at least 400 hundred years. It was originally a term used to describe the process of making chewing tobacco which required the tobacco to be twisted into a shape that looked similar to a pig's tail.About 200 years after using the term for chewing tobacco, people began referring to the specific hair style of parting the hair down the middle and securing it in bunches on two sides of the head as "pigtails." 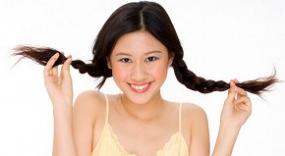 Braided tails can be fun and flirty for women.

The tails can easily be transformed from bunches of hair fastened with a band to a hair style that receives a lot of attention from both men and women.

Pigtails have been around for hundreds of years, and there's no doubt the style will be worn by children and women well into the future. The style is quick and easy, and can look adorable on little girls and trendy on adults. No matter what a person's age, this cute hairstyle is sure to receive compliments from both friends and strangers alike.