If you pay close attention to beauty news, especially when it's related to health or green issues, you've probably heard about a number of common shampoo ingredients that are best to avoid. The makers of the shampoos that contain those ingredients will be quick to assure you that they are perfectly safe, but a number of studies indicate that it is probably time to start looking for a new shampoo.

It may surprise and alarm you to know that one of the most common ingredients in shampoo is also a common detergent: sodium lauryl sulfate (SLS). SLS has been used in shampoo and other personal care products for years because it strips out oils and, despite its name, has a low sodium content. However, studies are showing that SLS can irritate the skin and, worse, it has been linked to some cancers. While this is not yet proven conclusively and some studies suggest SLS is not a carcinogen, many doctors suggest avoiding it until further studies are done.

Diethanolamine, more commonly called DEA, is not only a suspected carcinogen, it has been shown to negatively affect the development of memory cells, making it a particularly dangerous ingredient for pregnant women to use. One of its derivatives, triethanolamine (TEA) has also been shown to be carcinogenic.

Another popular ingredient, methylisothiazoline (MIT) has been shown to cause neurological damage, potentially putting a fetus at risk for brain damage. The chemical might also be a factor in the development of Alzheimer's and other nervous system disorders.

The Case for Natural Shampoos

Makers of shampoos containing these problematic ingredients argue that the concerns are alarmist. At worst, some of the ingredients might be connected with skin irritation in people with high sensitivity. However, with more evidence pointing to the real possibility that these chemicals are not safe, it seems wisest to leave the shampoos on the shelf and opt for more natural hair products.

One argument against natural shampoos is that they are more expensive than the drugstore brands that contain potentially harmful chemicals. This is true, but what many people don't know is that you don't have to wash your hair more than once or twice a week. In fact, it's healthier for your hair to wash it less frequently, as it gives the natural oils (which is what really creates shine) a chance to replenish themselves. If you have concerns about dandruff or something similar, you can always give yourself a natural hot oil or deep conditioning treatment, which is far better for your scalp than dandruff shampoos.

Although some natural shampoo ingredients might trigger allergies - many people can be sensitive to chamomile, for example - none are shown to be genuinely dangerous. It seems well worth the extra money to use a shampoo that does the job without potentially creating health problems. 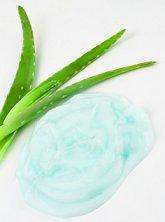 Aloe is a healthy ingredient.

Whether you shop at a health food store or online, it can be difficult to select a natural shampoo that fits your needs. You may also not be familiar with many of the ingredients, although you should at least be able to pronounce most of them, which is already a positive step - one rule advocated by doctors is that if you can't pronounce a product's ingredient, it probably should not be on your skin.

Some ingredients that might be of use to you are aloe, which is good for the scalp; coconut, avocado and wheat germ oils, which seal in moisturizer and add extra shine; lemon, which removes grimy oils and makes hair softer (it is also a natural bleach, but shouldn't affect hair in this form) and proteins like keratin and amino acids, which can address damage. Herbs are mostly just for the scent, although some, like rosemary, can have a darkening effect.

In a tight economy, it may be hard to spend more money on personal products, but the cost benefit to your health and well-being more than makes up for the few extra dollars at the register so you can avoid potentially harmful shampoo ingredients.