No one can deny the popularity of Victoria Beckham hair styles. The woman, known for being everything from a Spice Girl to international heartthrob David Beckham's wife to a fashion designer, is renowned in the beauty world for her immaculate, sleek and always trendy hair styles.

An Evolution of Styles

She's gone through as many hairstyle changes as she has outfits. During the Spice Girls' early years, she sported a shoulder-length bob hair style that boasted enviable shine. Her solo album's cover showed off a choppier take on the classic bob, short and layered for a more sophisticated, grownup look. Singles from the album showcased Beckham with a decidedly sharper style, often heavily textured and styled with precise definition.

Though she clearly has an affinity for bob hairstyles, she's also shown appreciation for ultra-feminine looks. Beckham has added lengthy hair extensions to her short locks to create an entirely new look. She's even added curls to straight extensions for a fuller, bouncier look.

Of course, such attention to differing hairstyles suggests an adventurous streak, which Beckham undoubtedly possesses in spades. She's sported everything from blonde extensions interspersed with black streaks and topped with bandanas for edgy looks, colored her famously dark locks a toned-down caramel-blonde hue to keep things light and, more recently, chopped it all off in favor of trendy concave and asymmetrical inverted bob hair.

This vast catalog of styles likely wouldn't be possible without a team of stylists at her every beck and call. For every new experience, event, and project Beckham takes part in, she usually has a new style to show off with it. Of course, that's not to say that many of these styles can't be replicated at home. They may not be exact copies, but you'll find that some of Beckham's styles don't always require the expert touch of a professional stylist.

There's no one better to model your hair after than Victoria Beckham, particularly if you happen to have a certain affection for bob styles. Beckham changes her look often, but she tends to remain true to the popular and very wearable bob.

Lately, Beckham has been synonymous with the sharp, asymmetrical bob. She, along with singer Rihanna, is heavily responsible for the style's popularity and its transition into the mainstream. In fact, her hair has become known in some circles as the "pob," or Posh's Bob after her Spice Girl days. She started with the traditional bob cut that was classic, with a slightly longer front and a shorter back. Then she transitioned to something more edgy by adding noticeably longer, textured layers at the front and graduated layers at the back.

Individuals with fine hair in particular benefit greatly from this style because it adds lift and suggests a fuller appearance. Even thicker hair benefits because it weighs it down slightly. In essence, the style works both ways. You've probably noticed that Beckham's hair hangs over one side of her face when she wears this style, essentially obscuring her eye. Make sure you're comfortable with hair hanging in front of your face before adopting this look! 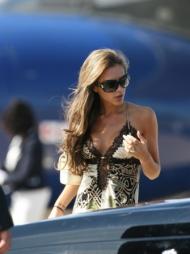 If that's not for you, consider the more traditional bob. During the early days of the Spice Girls, Beckham sported a very simple, casual bob that was pin straight and ultra-shiny. This style offers more styling options and is ideal for those who want something polished and clean-cut, yet not too brazen.

Color is a very strong aspect of Victoria Beckham hair styles. She's sported everything from her naturally dark shade to cool, almost white-blonde. Beckham makes strong use of hair highlights and lowlights shades to bring both subtle and dramatic changes to her hair without changing the actual style. Though she hasn't sported the cool blonde hair in a while, for example, she still wore a variation of the asymmetrical bob. Fast forward a couple of years later and she's wearing darker hair with her always stylish bob.

If you're especially fond of the asymmetrical bob and wish to model your own hair after Beckham's very adventurous, slick style, schedule a consultation with an experienced stylist. He or she will help you determine whether the cut is right for your face shape. Be sure to take along a couple of [[Images of Inverted Bob Hairstyle| photographs for inverted bob hairstyles]] or other Beckham cuts to help the stylist get a clearer visual of your desired look.

Victoria Beckham hair styles are sleek, edgy, and trendsetting. Particularly suitable for anyone who enjoys short hair styles, the variations of the bob that Beckham sports are perfect for many personalities and lifestyles as long as you crave a bit of celebrity flair.